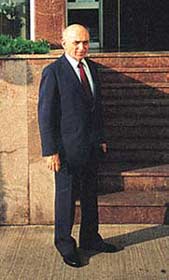 He attended İzmir Male High School and afterwards he graduated from İstanbul Technical University as a Mechanical Engineer Msc in 1948.

He became a notable and respected role model in the business world with his influential character and many achievements.

H. Ekrem ELGİNKAN took the first significant steps to institutinalize his companies and he stated that this decision is the result of mutual trust with his colleagues. H.Ekrem Elginkan, aimed to establish a foundation company which could survive on its own and make necessary moves.

Having enough tolerance, vision and principles to say his colleagues: 'Even I have made a mistake, state it clearly in your report', H. Ekrem ELGİNKAN maintained his business life without any legal inconvenience.

"All I wish from God is the progression of all organizations I have established, advancing career opportunities for people, paying tax to the state and being considered as a model for the future generations.”